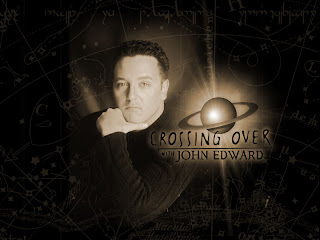 Alexis Brooks interviewed John on the set of "Crossing Over" early this year. Alexis is an author in the metaphysical and spiritual genre in her own right, and the questions she asks John, are not found in your usual "mainstream" John Edward interview.

The idea that an afterlife realm exists although prevalent in many cultural and religious doctrines, is still a theory that many grapple with. But if one presupposes a post life residence somewhere within the ether of the spirit world, perhaps one can entertain the idea of communicating with that realm.

John Edward, a rising star on this side of the veil wants us all to know that life and love are eternal and he holds steadfast to this message because he has been a medium for whom the message has been given and he says it comes from the "afterlife."

His spirited TV program, "Crossing Over with John Edward," which airs on the SciFi Network (Sun., 8-9pm ET/PT & Mon- Thurs., 11 & 11:30pm ET/PT) and is headed for syndication, has been the platform for these messages and more. Messages, which he says, are telepathically relayed from the energies who have departed physical life but still continue on in spirit form. Clearly this is a provocative claim - however it should be duly noted here that theories of an afterlife have not only been upheld by religions the world over, but by diligent research for well over a century that has spilled a cornucopia of data suggesting that such a realm may indeed exist.

Crossing Over has garnered an enormous and loyal following, peaking unprecedented interest to a mainstream audience, clearly crossing over to reach viewers from a diverse cultural, religious and socioeconomic scale to talk about the subject of death and life after death. When I asked Edward what he would attribute to the success of Crossing Over during a one-on-one interview on the set of the energy-filled show he said, "I think what's driving Crossing Over's (success) is as Gary Zukav put it in his (best-selling) book The Seat of the Soul - 'As a society, we are evolving...' and I think that on the planet and as a society, we are evolving. People are seeking knowledge and I think that they are seeking to identify with truth and seeking to identify with empowerment. I think Crossing Over is a show about life -
about how to better your life (and how to) lead a more fulfilling life with the people that you're connected to that you love, family and friends. And to know that the ones you have lost physically are still spiritually connected to us." Edward's summation is, "I would attribute the (show's) success to the tribute that we provide to the people that come here both living and 'crossed over.' "

While many are indeed openly amenable to his messages and even awe-struck by his accuracy and the process for which he gleans the messages, there are others who seem a bit perplexed as to why Edward can receive messages from "Dear Aunt Sarah," and on a public stage no less and not receive the messages from their loved ones directly. So the burning question becomes, "why is this so?" But a possible answer may very well lie within the philosophical framework of the ESP (Extra Sensory Perception) process.

Many practitioners of metaphysics, spiritually transformative states and even ESP researchers say that the key to receiving information of any kind outside of the physical sensory system is in having and keeping an open-mind. In other words we must free ourselves of rigid dogma and act as an open conduit for information, whether they be mere intuitive hunches or that long awaited message from "Dear Aunt Sarah." Many suggest meditation to help facilitate that process but my surmise is that an open mind, free of any one expectation may very well do the job.

Just prior to my interview with Edward, I sat in on a taping of the show and witnessed what I believe may provide a perfect illustration of this point.

Edward had been reading two audience members, a couple sitting roughly in the third or fourth row of the "Gallery," as the studio audience is known. As is usually the case a flood of symbols - frames of reference intruded upon his awareness and is always the case, he conveyed the messages he was getting in his frame of reference to the audience member(s) in hopes of them validating the messages. On several uncannily accurate references, they indeed confirmed the meaning; thereby validating what Edward was "getting." However, while watching this process, it was interesting to note that although Edward seemed to have been unequivocally on target, they remained quite aloof, almost gazing at him with a conservative but jaundiced eye. There was clearly some resistance to what he was saying and perhaps some preconceived notion about what he was doing. John then began to get a persistent (and I do mean persistent name - a female name beginning with the letter "H." Although he wasn't able to make out the name in its entirety, he began to get what the name sounded like.
The message became so insistent that he on several occasions had to go back to them and say, "they're not letting this one go...this is a name beginning with 'H.' You must know this." Nothing. It wasn't until well after the taping of this segment had ended, and the couple had left the building and a new segment had been well under way, when suddenly in the middle of tape, Edward yells, "Heather! The name is Heather...where did that couple go?"

Obviously (at the time of this writing) we do not know whether the couple was able to come back and validate the name, but what stands out is quite intriguing.

It wasn't until the couple's departure not only from the set, but from the building that Edward was able to "get" the name in its entirety, descending on his awareness like a plane making a perfect landing, (pun intended) albeit after the couple had left. Was it their seemed closed-mindedness that perhaps inhibited the message from getting to Edward's conscious awareness? I think this example might be worth contemplating.

And what about when something like this happens? When the message is so undeniably strong that Edward just can't let it go? I asked him what that sensation feels like and why he so often persists until some recognition on the part of the audience member(s) is achieved? When messages come through forcefully, "I feel like I'm being held hostage. Locked! That's the feeling. I get a feeling of being locked-in."

So how do people react when Edward becomes at times, unrelenting about getting his messages across? "...I say to people all of the time, 'listen, I don't care if you're liking me. I'm not here to win a popularity contest, you know? I'm here to deliver a message. And you leave with the message - right, wrong, interpreted correctly, misinterpreted - it's all coming through.' I just want to show them what the process is and the understanding and maybe a month from now it's going to mean something that's just going to make them just totally, totally appreciate the experience more - and that's happened!"

Aside from the occasional itch of tenacity, which he has been known to exude, there is every reason to like John Edward. This 31-year-old native Long Islander who has a dual degree in Public Administration and Health Care Administration is an endearing and engaging personality. He is quick witted, sharp and passionate. I was especially touched by his level of humility and warmth, even amid a hectic work day on a pressure filled TV production set. Most important, he appears totally committed to his work - a profession, which he admits, he was ambivalent about at first. "The thought of this being my career was so not even remotely okay with me. After you go to school for so many years and you get a degree, that's like the professional thing, (but) I said, 'well, I'm helping a lot of people doing this (psychic mediumship) - let me just do it for a little while longer.' Well, it's been a little while (smiling), so for the last 5 1/2 years, this has been my career,solely."

Will science ever declare "life after death" a viable theory? Will the thinkers and teachers of science at large ever give credence to the "survival" paradigm? Although Edward does not believe we will witness science's proclamation in the affirmative anytime soon, he hopes that his presence and his show might help forge us toward a renewed understanding that life does not end when we take our last physical breath and most importantly, that those who have "crossed over" are still in fact connected to us, watching over us and are aware of what we are doing, our joys, our struggles, our triumphs! "As a medium, I want people to understand the process and (when they do) that needing to connect with a medium doesn't become the fast food (they seem so desperate for) but rather it becomes a cookbook for life. The process of connecting is not one quick meal, it's a cookbook of understanding!"

But in pondering this ultimate question of the reality of an afterlife, perhaps we need not look to a formally accepted paradigm for validation. Often the most profound truths come from one's own personal experience, even if it appears shrouded in mystery. For as the famous American physicist and philosopher Richard Feynman once said, "It does not do harm to the mystery to know a little about it."

Check out a few of John Edward's new books/insights here (worth the look):